Communique: redecoration in the Highlands neighborhood

After a day in the sun and streets of Denver and a rowdy-as-hell May Day demo, some queer anarchist demons of the nights let their hair down and gave some gentrifying fucks a much-needed makeover. These comrades are sick of seeing property prices in the formerly working-class Highlands neighborhood skyrocket, all due to yuppies, their condos, and the corporations that invade to please them.

These comrades grew tired of seeing that ugly beige Starbucks on Federal, so they gave it a new paint job. Five paint bombs gave the storefront a beautiful facelift; a concrete planter was also liberated into a few pieces during the action. The queer demons of the night attacked Starbucks for the role they play in gentrification, but also for their co-opting of queer struggle. Starbucks recently endorsed a push for gay marriage, an assimilationist goal of white, cis-gendered, upper-class gays. We have no desire to become part of the system that destroys us, and we will never assimilate to the society of oppression built and maintained by heterosexism and cissexism. This action was also carried out in solidarity with the Starbucks Workers’ Union of the IWW, and their struggle for recognition.

Later that night, this merry band of queers attacked a police car parked outside a private residence with another paint bomb. Cops are also part of the gentrifying force in the Highlands, harassing the working class and defending the property of yuppies and corporations (a lot of good that did for the Starbucks). Pigs have a long history of attacking queer folk, from the Compton Cafeteria riots and continuing today. While not a direct confrontation, the message gets across: we know you’re in our hood, and we don’t like it. Either quit your job, or put a bullet in your own head.

All of these actions were carried out in solidarity with CeCe McDonald, a trans* and black self-defense prisoner of war. She is currently on trial, facing murder charges in Minneapolis, MN after getting into a fight with a neo-nazi and some transphobes. Honee Bea, you’re in our hearts and minds!

We also stand in solidarity with our comrade arrested during the May Day demo due to the actions of so-called “marshals” who are also self-proclaimed pacifists. In every Occupy Denver altercation, it has ALWAYS been the “pacifists” who physically start shit with the “violent anarchists.” Fuck off and die, peace nazis. Especially Roshan Bliss and Tanner Spendley; you’re both on our shit-list, you liberal, snitching scum.

Solidarity to all prisoners, especially our queer and trans* liberation prisoners of war. We’re coming for you, comrades.

Until all cages are empty,

May Day was started off right by a team of local anarchists with an attack on a police patrol car at aproxamately 1am at 13th and Speer. Multiple windows were completely smashed. No jusification was given for none was needed, the institution of police being inherently unjustified. We’ve set the tone, now it’s your turn to up the ANTI and make total destroy on May Day 2012.

So I felt really bad about missing two months of Ignite! issues and had this poster laid out a while back. I decided to include it as a pull-out kind of bonus when I printed more copies of Ignite! #6. If you click the thumbnail to the left you get a snazzy 12″ X 18″ PDF version, but the ones included with #6 are full-bleed and full-color 11″ x 17″ on 60# text. The poster features a bomb-ass poem that has been performed around town a few times by a poet that is remaining anonymous. It could look better but I have the design skills of a highly-functioning sewer rat that is impatiently waiting for a hemorrhoid condition to clear up. 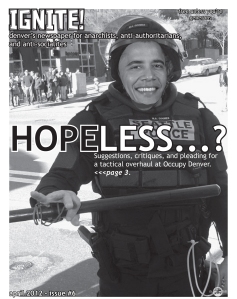 “Did you hear that another Ignite! got put out? They hadn’t done an issue since like January.”

“Yeah, I did. That guy is an asshole though and doesn’t really do anything.”

“I mean does he even fucking proofread?”

“Probably not. Heard he wasn’t even vegan.”

next cushy and likely flexible deadline is probably going to be on I don’t know how about feb. 6th?

alright we’ll do that. go ahead and email some stuff over if you got it, if you can’t meet the deadline that’s cool too the person who lays the whole thing out is seriously the slowest and haphazardly lazy person in at least 600 miles so you’ll probably make it anyway. and also if you live in denver or the surrounding area and want to help flesh this project out a bit come to the meeting on feb. 17th at 6PM at the 27 social centre (there’s a whiteboard there… infinite possibilities). if someone has time to go to the store beforehand there might be snacks and everything, not that that’s on you or anything.

– Shit getting tore up, politicians getting robbed in Greece.

-An editorial for those who make New Years Resolutions.

-You’ll just have to read page 5 to find out what’s going on in town and it ain’t no bowling team.

Get the print version around town, at places like the 27 Social Centre, local collective houses, on the bus and lightrail. Sorry it took so long and doesn’t look that good. Feb. 17th there will be an Ignite! meeting at 27 SC. Come so this shit doesn’t come out so late and someone with a brain and skills can help put things together.

Wheat Pasted posters and graffiti put up or inspired by anarchist action is pretty common in Denver. Largely due to the materials produced in the leading up to anti-police demonstrations, it is commonly directed towards the police department. The following report shows how autonomously, affinity groups and individuals produce their own materials and paste their own posters around the city. They posted several pictures and two wheat paste recipes to Colorado Indymedia:

It smells of insurrection on this christmas evening. It kinda smells like corn starch, water, and elmers glue. Denver felt the wrath of these black clad and very cold Coloradans. The message: “From the nile to the platte, hit a cop with a baseball bat” Some of the targets included 5 points and east colfax ave. They say misery loves company and these miserable cold poor souls would love some company on the streets of denver. I hear wheat paste sticks especially well to cop cars.

A recipe of love to spread the rest of denver the joy we feel in our hearts on this cold christmas evening.

HOW TO WHEAT PASTE
Method 1…
Use some cornstarch instead of flour. It makes it clear instead of that nasty brown-ish color.
Add 1 cup cornstarch for every 2 cups of water…it tends to get maddd thick so add more water as you go. If it starts to clump then use a masher to break up all the clumps and your good…nd when ur done cookin it add a little bit of sugar and it makes it mad sticky…
Cause its clear you can use it to put over top the work when you done…cheaper then any of that spray stuff.

Pour wheat flower till it fills up 1/3 of the way. Pour some water in while you stir it so that it mixes good. You got to use that spray sealant this way cause it comes out that brown-ish / tan-ish color…

Spread the cheer in your neck of the woods.

3 “militant, anti-police” banner drops were reported to have taken place on Winter Solstice. A communique and several pictures were posted to Colorado Indymedia:

During winter solstice rush hour, Three (count’em) three militant anti-cop banners were dropped off a bridge faceing both ways on I-25 downtown. They read “DPD turn your weapons on yourselves”,”James Bradley was right” (in reference to the man recently shot and hospitalized for hitting a police cruiser with a hammer) and “FROM THE NILE TO THE PLATTE HIT A COP WITH A BASEBALL BAT!” They were seen by thounsands of motorists driving slowly on icy roads during rush hour traffic. And are rumored to have made several cops weep.

An anonymous, spartan posting to Colorado Indymedia this afternoon read:

time: after your bedtime

rationale: immediate retaliation for the eviction of the civic center park homeless encampment. for dpd’s existence. to encourage you to join in on the fun.

Update 5:11PM 12/21: Michael Clapper, the only felonious prisoner from Monday’s eviction, is presently being held on felony fourth degree arson with a bond of $50,000. Support is in the process of being mobilized, updates forthcoming.

Update 4:51PM 12/20: Here is some pretty solid video of last night’s action. As we speak, several of those arrested on minor charges are in the process of being bonded out.

Update 1:15PM 12/20: Important tweet from Denver ABC: Clarity: DABC is not coordinating legal support for #occupydenver. Members are aiding those from OD working on legal in a limited capacity.

Members of DABC are assisting OD in coordinating their own legal support. Apparently they had nothing in place for this. Another DABC tweet: As of 1:15pm, the total bond needed for #occupydenver arrestees is $9,727 (excluding booking fees, which are typically $30-60 per person)

Update 12:00PM 12/20: The Denver Post has released nine names of people arrested last night. Most of the arrested are facing misdemeanor charges, but Michael Clapper is facing a fourth degree felony arson charge. Highest bond right now is for Clapper at $5000, lowest is $100. Bail needs are nearly at $8,000.

Update 11:30AM 12/20: Protesters marched through the capitol hill neighborhood after the eviction, waking people up. Many left their homes and joined the march.

Update 11AM 12/20: Six confirmed arrests from last night. Bail so far is set to exceed $3000. Waiting for updates from court to confirm charges and bail amounts.

Last night, during police action taken to evict the Occupy Denver camp, protesters bravely faced down battalions of riot police. Structures built in the park were set alight, demonstrators fought police, threw barricades in the street, and staged raids on the dump trucks carting away their things. 4 arrests were made, 2 of which are felony arson cases.

While some of the Denver anarchist community, thick with ranks of veterans of militant protests, has checked out of the encampment (including the Denver Anarchist Black Cross, who headed legal support until two weeks ago, where that support was withdrawn for various reasons), many have woke up this morning surprised and concerned for the comrades on the ground. Many are doubtful as to whether Occupy Denver’s legal team will be willing to take on these arson cases, being that setting fires, barricading streets and fighting police doesn’t fit their liberal narrative of what a protest should look like. Those of us in Denver who know better are looking to step (back) up.

It is inspiring to see elements of the camp resist police eviction with tangible, meaningful action, especially in light of losing formal radical legal support. The local ABC was not expecting to take calls last night, yet the demonstrators on the ground fought back without fear and knowing full well bail might not be a phone call away. Please send updates to us on Twitter or through email at ignitedenver@riseup.net.